Several known coronaviruses are circulating in animals that have not yet infected humans.

The name coronavirus comes from the Latin word corona, meaning crown or halo. Under an electron microscope, the looks like it is surrounded by a solar corona.

The novel coronavirus, identified by Chinese authorities on January 7 and since named SARS-CoV-2, is a new strain that had not been previously identified in humans. Little is known about it, although human-to-human transmission has been confirmed.

What are the symptoms?

According to the WHO, signs of infection include fever, cough, shortness of breath and breathing difficulties.

In more severe cases, it can lead to pneumonia, multiple organ failure and even death.

Current estimates of the incubation period – the time between infection and the onset of symptoms – range from one to 14 days. Most infected people show symptoms within five to six days.

However, infected patients can also be asymptomatic, meaning they do not display any symptoms despite having the virus in their systems. 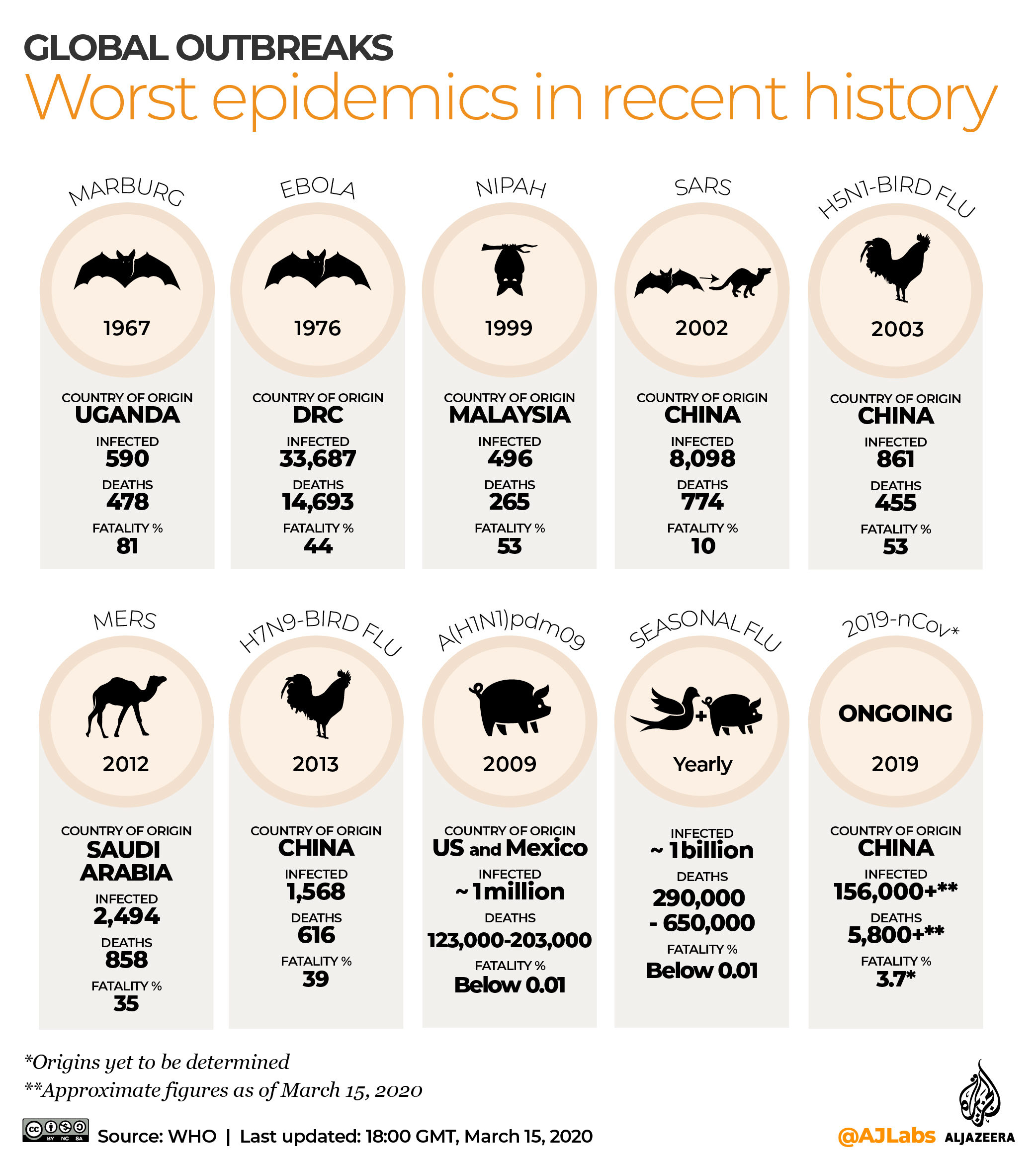 How deadly is it?

With more than 6,400 recorded deaths, the number of fatalities from this new coronavirus has surpassed the toll of the 2002-2003 SARS outbreak, which also originated in China.

SARS killed about 9 percent of those it infected – nearly 800 people worldwide and more than 300 in China alone. MERS, which did not spread as widely, was more deadly, killing one-third of those infected.

While the new coronavirus is more widespread than SARS in terms of case numbers, the mortality rate remains considerably lower at approximately 3.4 percent, according to the WHO.

Where have cases been reported?

Since March 16, more cases were registered outside mainland China than inside, marking a new milestone in the spread of the global pandemic.

Deaths have been reported in several countries, with Bahrain recording the first fatality in the Gulf on Monday.

The virus has spread from China all around the world, prompting the WHO to designate the COVID-19 outbreak as a pandemic

Human-to-human transmissions became evident after cases were recorded with no apparent link to China.

What is being done to stop it from spreading?

Scientists around the globe are racing to develop a vaccine but have warned it is not likely one will be available for mass distribution before 2021.

Meanwhile, Chinese authorities have effectively sealed off Wuhan and placed restrictions on travel to and from several other cities, affecting some 60 million people. Other countries have since followed suit with total lockdowns, closing schools, restaurants, bars, and sports clubs, and also issuing mandatory work-from-home decrees.

International airlines have cancelled flights the world over. Some countries have banned non-citizens from entering their territories, and several more have evacuated their citizens from abroad.

Where did the virus originate?

Chinese health authorities are still trying to determine the origin of the virus, which they say likely came from a seafood market in Wuhan, China where wildlife was also traded illegally.

On February 7, Chinese researchers said the virus could have spread from an infected animal species to humans through illegally-trafficked pangolins, which are prized in Asia for food and medicine.

Scientists have pointed to either bats or snakes as possible sources of the virus.

Is this a global emergency?

Yes, this outbreak is a global health emergency, the WHO said on January 30, raising the alarm further on March 11 when it declared the crisis a pandemic.

The international health alert is a call to countries around the world to coordinate their response under the guidance of the WHO.

Planning for an African Safari

Uganda’s one game viewing area of note is Queen Elizabeth National Park (QENP), with the ice-covered peaks of the Rwenzori Mountains as a backdrop. The park is rich in wildlife, including the tree lions at Ishasha, and is a haven for bird-watchers.

Kenya, Ethiopia, Sudan and Guinea announced their first confirmed cases of corona virus on Friday as the disease has now spread to at least 18 countries in Africa. Other African countries that reported cases of the disease are Morocco, Tunisia, Egypt, Algeria, Senegal, Togo, Cameroon, Burkina Faso, the

The 2000 Hotel, known as the highest hotel in Kigali, has a rooftop terrace and offers views of the mountain and the city. Free private parking, free WiFi in all areas and a fitness center are available.
The rooms have a flat-screen satellite TV. Some rooms have a seating area. All rooms have tea or coffee making facilities, views of the mountains or the garden and a private bathroom with a bath, bathrobes, slippers and free toiletries.
The Bamboo restaurant serves Chinese and Western dishes. The bamboo bar offers a large selection of wines.
At 2000 Hotel Kigali you will find a fitness center and massage services. There is also a business center. The staff at the 24-hour reception speaks English, French and Chinese.
On the ground floor you can find a shopping center and a supermarket. The financial district and the Kigali city tower are a 2-minute walk from the hotel. The tourist information center is a 5-minute walk away.
The 2000 Hotel Downtown Kigali is 11 km from Kigali International Airport. Also, a shuttle service to the airport is provided.