Big Tim died in Mada area of Amboseli National Park from natural causes, KWS said in a statement on Wednesday.

He was “a benevolent, slow-moving preserver of the peace at Amboseli,” KWS said. “He was well known and loved throughout Kenya.”

Big Tim’s carcas was found at the foot of the snowcapped peak of Kilimanjaro, the Amboseli Trust for Elephants said.

An elephant is technically a “tusker” when its ivory tusks are so long that they scrape the ground. 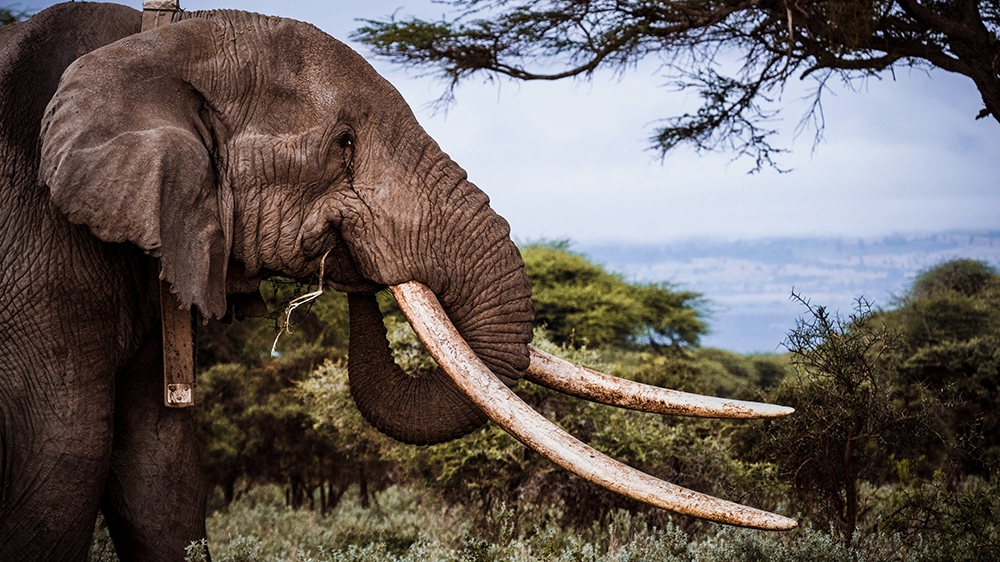 But conservationists estimate only a few dozen such animals with tusks that size are now left on the continent due to poaching.

Animals with the biggest ivory and elephants with the heaviest tusks are most at risk from poachers.

Tim was named by researchers who called each elephant in the family herd they were monitoring by the same letter to help identify them; Tim was a member of the ‘T’ herd.

The giant pachyderm once roamed outside the national parks into farming lands and had survived poachers and angry farmers.

Vets once treated him for a spear that had gone through his ear and snapped off into his shoulder.

“Tim was one of Africa’s very few Super Tuskers, and an incredible elephant whose presence awed and inspired many. He was one of Kenya’s National Treasures.”

Big Tim’s body is being transported to the Kenyan capital Nairobi, where a taxidermist will preserve it for display at the national museum, KWS said.

Poaching has seen the population of African elephants plunge by 110,000 over the past decade to just 415,000 animals, according to the International Union for Conservation of Nature (IUCN).

Welcome to Uganda for Gorilla Trekking tour, On ou

Our Day2 in Zanzibar we visited the prison Island.

Our Safari adventures are crafted/operated by the

Welcome to Uganda for a family tour, enjoy your sa

TIME FOR DISCOVERY, TIME FOR YOURSELF Our holidays

Welcome to Uganda for 9 Days Safari.. What makes U

Uganda has been ranked the happiest country in East Africa according to the World Happiness Report 2021 released by the UN Sustainable Development Solutions Network. According to the report, Uganda ranked 83rd globally. In East Africa, Kenya followed at 86th while Tanzania at 94th globally.

Entry to Uganda: As of 3 September 2021 new COVID-19 measures are in place at all points of entry including Entebbe International Airport. All arriving passengers are required to provide a negative COVID-19 test certificate issued no more than 72 hours before boarding the aircraft to Uganda or crossing land borders. Foreign nationals without a valid negative test certificate will be denied entry.

A walk into the forest which ranks the best in Uganda with 23 highly localized forest Albertine Rift endemics will expose you to your dream forest bird species. Ruhija being the highest peak of the forest offers the best view of rear species such as white starred robin, grey cuckoo shrike, strange weaver, banded Prinia,

This website uses cookies to improve your experience while you navigate through the website. Out of these cookies, the cookies that are categorized as necessary are stored on your browser as they are essential for the working of basic functionalities of the website. We also use third-party cookies that help us analyze and understand how you use this website. These cookies will be stored in your browser only with your consent. You also have the option to opt-out of these cookies. But opting out of some of these cookies may have an effect on your browsing experience.
Necessary Always Enabled
Necessary cookies are absolutely essential for the website to function properly. This category only includes cookies that ensures basic functionalities and security features of the website. These cookies do not store any personal information.
Non-necessary
Any cookies that may not be particularly necessary for the website to function and is used specifically to collect user personal data via analytics, ads, other embedded contents are termed as non-necessary cookies. It is mandatory to procure user consent prior to running these cookies on your website.
SAVE & ACCEPT
Translate »
Open chat

https://www.safaribookings.com/operator/t17733
Our six days trip was amazing. The driver/guide had an incredible knowledge of animal and bird-life and are so interesting to talk to. His driving skills through lashing rain and massive puddles was admirable! The cooks managed to produce varied and delicious meals from the kitchen, which we ate both at accommodation or roadside when we were travelling from one place to another . At all times we felt safe and well-looked after. All in all, an incredible experience, due not only to the abundance of wildlife we were lucky enough to see, but also to the great efforts put to have our Safari a better one . The safari was full of fun. Traveling with ngoni safaris is my life time memorable experience and I highly recommend it to travellers who would love to visit uganda or EastAfrica for holidays, vacations or Adventure.. Even five stars are too small .
5
Excellent
error: