Back in the 1960s Uganda was home to about 700 white rhinoceros – the name of which finds its origins in the Greek words for ‘rhino’, meaning nose, and ‘ceros’ meaning horn.

These white rhinos aren’t actually white, and neither are black rhinos actually black. The word ‘white’ is merely a mispronunciation by the early English settlers in South Africa of the Dutch word, ‘wyd’, meaning wide. This rhino was described as ‘wyd’ because its lips were wider in comparison to its smaller cousin, the black rhino, which has a prehensile upper lip. Meanwhile, the black rhino got its name from being seen with mud on it, which lent it a darker colour when in actual fact, both rhinos are grey. 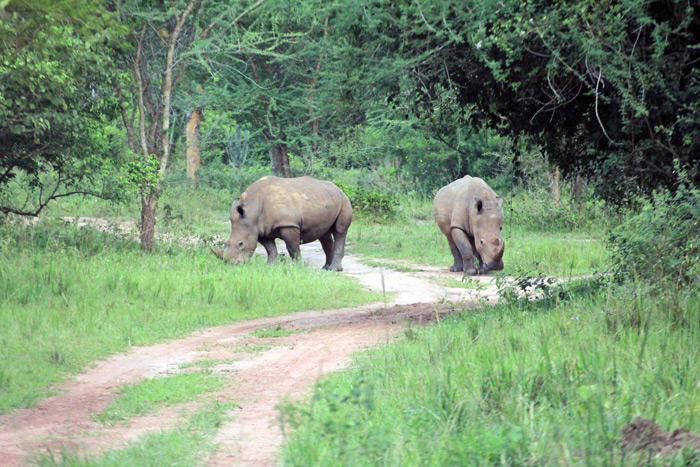 When Idi Amin took power, and the land was under his dictatorship, the number of rhinos dwindled dramatically. Now there are just a few rhinos left in Uganda. Two can be found in the Entebbe Zoo, and the remainder are under the watchful eyes of the Ugandan Wildlife Authority, who keep tabs on the rhinos in the Ziwa Rhino Sanctuary, all day every day.

The sanctuary has gone to great measures to ensure that the world’s second largest land mammals are well protected. Three electric fences separate the 7,000 hectares of land from the rest of the world. The fourth boundary is a natural swamp where bird watchers might catch sight of the rare African shoebill and other migratory species. 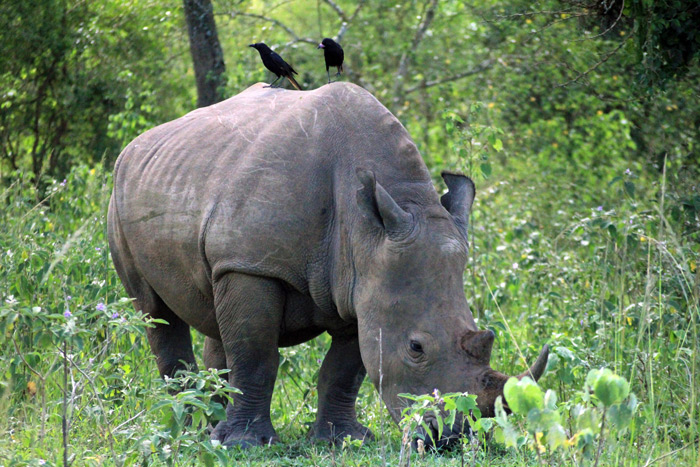 Rhinos are one of the least researched animals on our planet, but at the Ziwa Rhino Sanctuary, the rangers that protect the animals observe their behaviour. Here are 10 interesting facts that you may not have known about white rhinos:

1. Rhinos are social, similarly to elephants, and have small families called a ‘crash’.

2. A dominant male plays the father and protector (although the calves will never really meet their dad).

3. Like elephants, they mourn the death of a family member.

4. Their skin is three inches thick.

5. They’re short sighted but they have acute hearing and a heightened sense of smell to compensate.

6. Their head is the heaviest part of their body, which is why they only eat short grass.

7. They need to consume up to 150 kilos per day and drink 60 to 80 litres of water in order to sustain their three-tonne weight.

8. A male rhino will mature at 10 years old while a female will take eight years.

9. Their average life span is 45 years and they’ll continue to grow throughout the course of it.

10. In her lifetime, a single female can produce up to 12 offspring, going through a gestation period of 16 months, which is the second longest period for any mammal; elephants have the longest at 22 months. 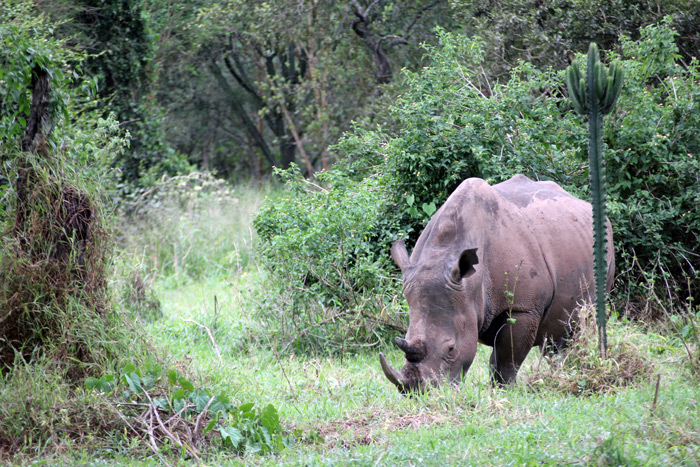 Ziwa has had quite the success. Ten calves have born (although sadly, one was still-born) and there are five crashes living in the sanctuary alongside bush buck, leopard, honey badgers, armadillos, waterbuck, warthog and vervet monkeys.

Their main challenge (apart from keeping out poachers) is to ensure that the pastoralists that bring their heavily horned cows for grazing don’t bring in disease. Each herdsman must carry a specially issued ID card, which he must present to any ranger who comes across them. And the cows need to leave enough grass for the rhinos. 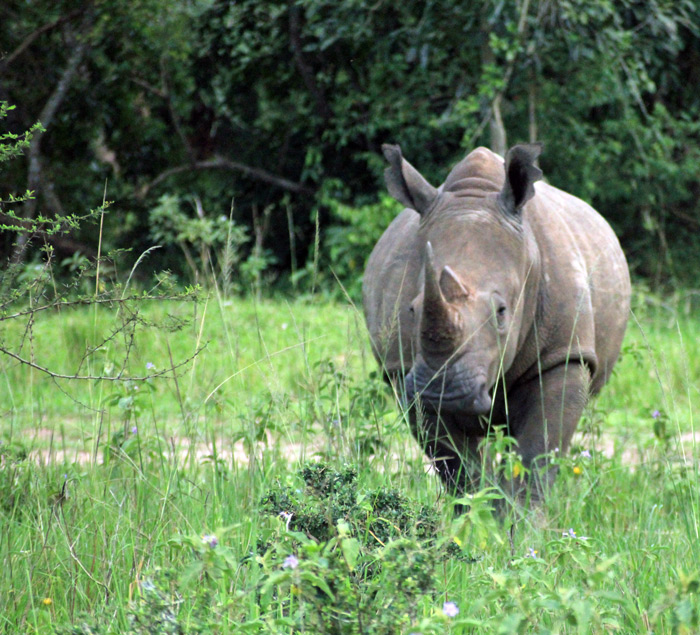 When a calf is born, the mother will separate it from the crash to raise it until it is strong enough. Unfortunately, no matter how strong it becomes, there’s nothing stopping humans – the rhino’s biggest threat – from killing it for its horn. 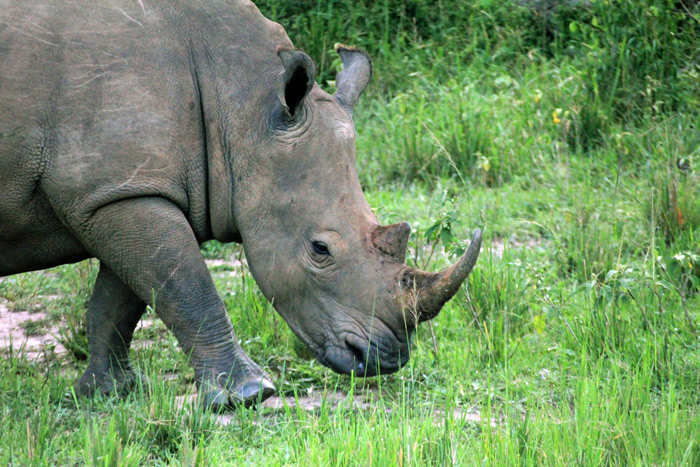 Thought, but never proven, to have medicinal powers such as curing hangovers, cancer and impotency, the biggest market for rhino horns is in Vietnam where a kilo can go for as much as US$65,000. The horns are made from keratin, the same substance that makes our hair and nails, which means that, essentially, a rhino’s horn is just one massive dreadlock.

As with all conservation, Ziwa’s main struggles are funding so if you’d like to help protect one of the most endangered mammals on our planet, visit www.rhinofund.org. 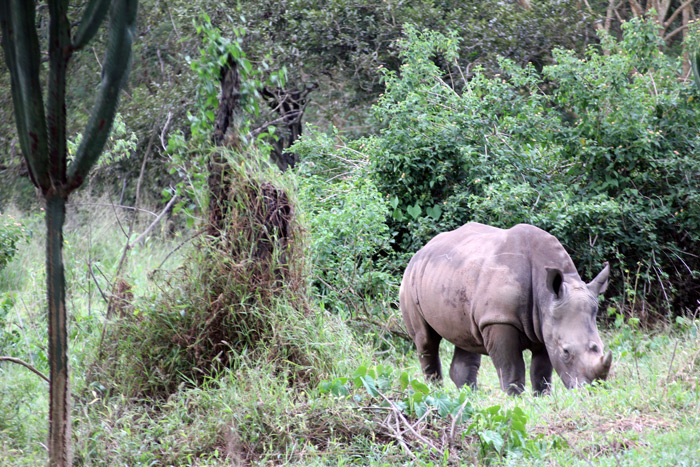 Welcoming our clients from #usa🇺🇸 Karibu to

Did you know that #gorillas 🦍💞😍 are fri

The #gorilla #mother and her twins🦍🌟🌍🇺

BUHOMA Buhoma Lodge Buhoma Lodge, a top quality and intimate property, commands spectacular and uninterrupted views of the Bwindi Impenetrable Forest National Park, home to the rare and elusive Mountain Gorilla. One of only two lodges situated within the National Park, we’re a short walking

Each year, especially during the Peak Tourism Season of June through October and December through March there are African Travelers who miss out on Gorilla Trekking. The reason is that they unknowingly have made the Number 1 Gorilla Mistake resulting in no  Gorilla Trekking Permit […]

The best time of the year to Visit Uganda &  Go For Gorilla Trekking Uganda is known as a whole round travel destination to any tourist planning to travel. This is due to its climate and location to the equator. The other factor making Uganda […]

Dubbed a ‘national treasure’ in Kenya, Big Tim died in a national park from natural causes, wildlife officials say.Big Tim’s body is being transported to Nairobi, where a taxidermist will preserve it for display at the national museum [Ryan Wilkie/Save the ElephantsOne of Africa’s last remaining giant “tusker” elephants has died in Kenya aged 50, the country’s wildlife service (KWS) said.Big Tim died in Mada area of Amboseli National Park from natural causes, KWS said in a statement on Wednesday.”The celebrated elephant died early on Tuesday morning aged 50,” the statement said.